Purchase yours today for a limited time! 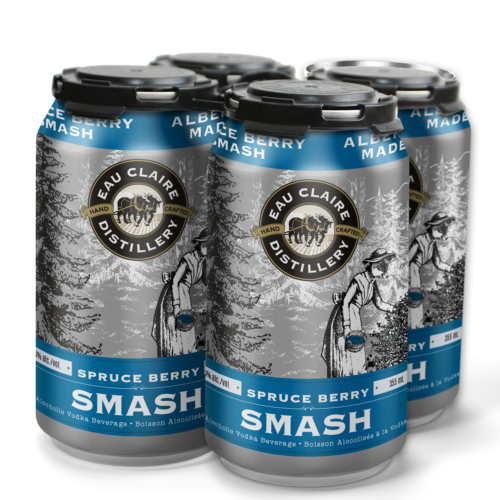 Spruce up your Spring with the latest premixed cocktail from Eau Claire Distillery.

The Spruce Berry Smash is a delicious mix of Eau Claire Vodka, juicy raspberries, fragrant spruce and a touch of honey for natural sweetness. Upon first sip, this well-balanced canned cocktail begins with a light spruce flavour and aroma delightfully mixed with sweet raspberries. This vodka-based tipple is a welcomed addition to Eau Claire Distillery’s already sought-after lineup of canned cocktails.

Eau Claire Distillery formerly had three ready-to-drink cocktails, which includes two gin-based premixed drinks including, the Parlour Gin & Tonic and Cherry Gin Collins, as well as one a vodka-based canned cocktail, the ever so popular EquineOx Mule. The Spruce Berry Smash will be Eau Claire’s second vodka based canned beverage, released just in time for the warmer months.

Described by many already on social media as what you would expect the word “refreshing” to taste like, the Spruce Berry Smash is an exciting new release from the distillery that was inspired by local Rocky Mountain fragrances and flavours. Ready for any adventure, Spruce Berry Smash requires no mixing or stirring!

When asked how Spruce Berry Smash came to be, Eau Claire Distillery’s Master Distiller, Caitlin Quinn, says, “we wanted to create a canned cocktail that would remind spirit lovers of flavours found across Alberta. Inspired by the spruce tips of the Rocky Mountains and wild raspberries found in the prairies, the name Spruce Berry Smash represents a combination of truly Albertan flavours. There’s nothing quite like it!”

At 6% alcohol, the craft cocktail is easily enjoyable and sold in four-packs of 355ml cans at a recommended retail price of $14.49. The Spruce Berry Smash is available at Eau Claire Distillery, Calgary Coop Wine, Spirits and Beer, Highlander Wine and Spirits, Kensington Wine Market, in Edmonton at Devine Wines and throughout the province at Sobeys and Safeway liquor stores. You can find a full list of locations at Liquor Connect. Cheers to adventure with Spruce Berry Smash!

Whisky drinkers, we have something exciting headin

It sure has been an interesting year. We hope you'

If you needed another reason to stop by our Speake

Have you signed up for our Cask Club Newsletter? B

Raise your hand if you still have your Christmas t

#TBT to Harvest 2021! Did you know that every year

Ever wonder where our Three Point Vodka got its na

Our Speakeasy just has a special charm to it when

Our Single Malt Whisky Batch 005 is the perfect wa

Sip back and relax, you've made it through the fir

Alberta, you may be cold, but you sure are beautif

Dry doesn't have to mean boring if you're taking i

We are able to ship our award winning spirits only within Canada.
Due to interprovincial trade restrictions we are unable to ship to QUE, NB or NFLD. Dismiss